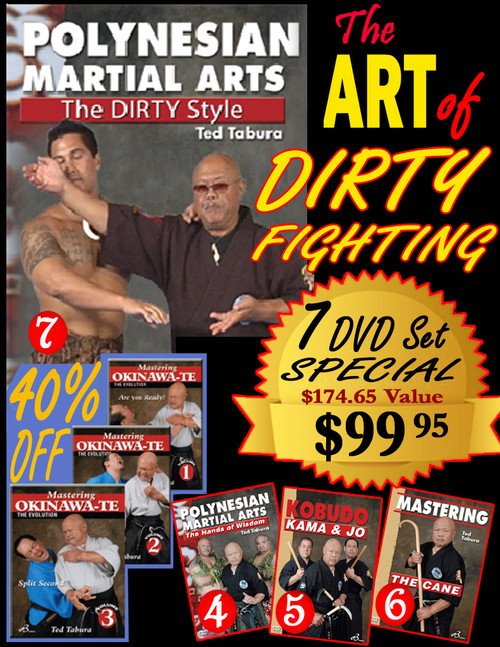 Ted Tabura
Born and raised in Hawaii, Shihan Tabura began his martial arts training under his cousin's tutelage in a backyard dojo. Later, after moving to Southern California, Ted discovered the Okinawa-te dojo headed by another Hawaii-born instructor, Shihan Gordon Doversola. While training at the Okinawa-te dojo, Tabura met John Louis, who became his final instructor in Okinawa-te. Martial art has been a way of life for Master Tabura. There were many years of tournament competition in which Shihan Tabura won many trophies around the world. Tabura Sensei was dubbed “The Sickle Man” by Sijo Adriano Emperado, founder of Kajukenbo, for his mastery in the use of the Japanese kama (sickles). Shihan Tabura directs the annual Festival of the Kings Karate Championship in Maui, Hawaii, one of the greatest tournaments in the U.S.

Vol.4 The Hands of Wisdom
The first comprehensive DVD of the Polynesian Martial Arts in any language! In this complete DVD, Hanshi Tabura presents a masterful tale of the techniques of Hawaii’s original and largest Martial Arts style. In addition to presenting the compelling fundamentals of the style, Master Tabura covers recent developments in the ever-evolving art.  Rare and never-before-seen on DVD techniques cover everything from the roots of the art to its development in Hawaii and the current state around the world.

Vol.5 Kama & Jo
The weaponrytechniques of Kama and Jo comprise about half of the arsenal in Okinawa Kobudo. Perhaps of more importance, being that the weapons are far superior in both strength and reach to the arms and legs, neglecting the proper development of the use of these weapons can result only in a partial development and understanding of the art. The proper use of Kama and Jo opens a full array of possibilities in both offensive and defensive maneuvers when using weapons. All the techniques, from defensive positions to devastating attacks, are analyzed and explained with precise and clear descriptions.

Vol.6 MASTERING THE CANE
Hanshi Tabura has firsthand knowledge of the effectiveness of the techniques presented in this DVD. Today, martial artists of many styles have learned the art of using the Cane to improve their Martial Arts knowledge, and especially to defeat opponents via chokes. Included in this DVD are the most important criteria to learn to develop the important techniques of the Cane for combat and self-defense. Master Ted Tabura shares the knowledge he has gained through personal experience in combat. This DVD has a great deal to offer to all Martial Arts and weaponry students, from beginner to black belt level. It also is a unique way to learn about the true and devastating techniques of the Cane.