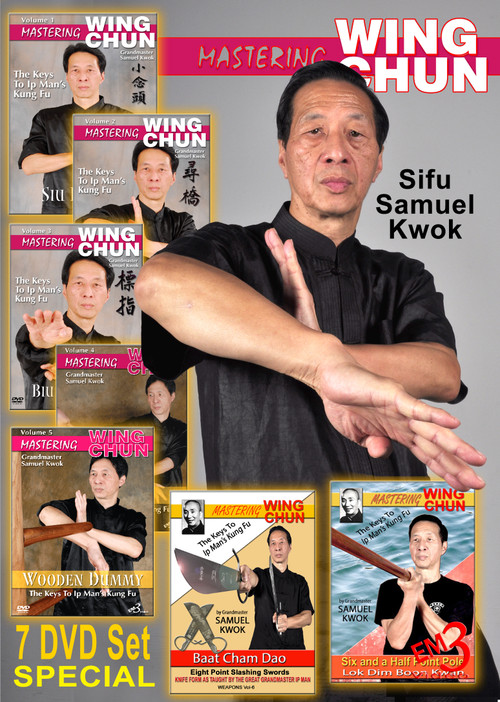 Grandmaster Samuel Kwok’s Video of the Wing Chun Butterfly Knife FormIt’s a bit difficult to write something different or illuminating about Samuel Kwok’s video of the Wing Chun Knife Form. I’ve seen several reviews already. They were all quite good and pointed out the video’s major virtues. GM Kwok’s video shows the knife form properly and in detail from several angles. The explanations of the applications are clear and concise and are also extremely effective when tested.That said, it is interesting to compare GM Kwok’s video to other videos on the subject of the knife form. I’ve seen numerous renditions of various knife forms, most of them probably invented by the demonstrator or their teacher to show that they know the complete Wing Chun system. With GM Kwok’s knife form the source is very clear. This is the knife form as done and taught by Ip Ching. Many of these renditions of a knife form feature a number of techniques thrown together haphazardly and with no real direction. The knife form as demonstrated by GM Kwok is divided into eight clearly defined sections corresponding with the eight cutting angles demonstrated by the form. Each technique, each piece of footwork and each cutting angle has a specific function and integrates perfectly with the Wing Chun System as we know it through the empty hand forms.In GM Kwok’s video we can see the practicality of the knife form in practice and in application. I have studied fencing and the sword for a number of years, both through classical sport fencing and Historical European Martial Arts. In many of these videos the demonstrator violates almost every basic rule of swordsmanship. The feet and the hands often move without balance and coordination. The person swinging the butterfly knives moves the feet or the body without moving the weapon and thus telegraphs their attack and intention to the opponent. They use their weapon in what George Silver would call a “false time” in his Paradoxes of Defence. In contrast, GM Kwok moves his knives economically and in harmony with the feet thus maximizing power without displaying his intent to an opponent. He fences in a “true time”. The applications of GM Kwok’s knife form are efficient and effective. In short they would work in a combat situation. It only takes one generation to lose the meaning of a form and its practical application in actual fighting. In releasing this video GM Kwok is performing a great service to the Wing Chun community and protecting and preserving one of Wing Chun’s rarest treasures. For that reason alone this video deserves a stellar review.