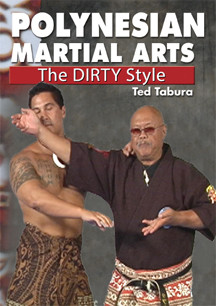 POLYNESIAN MARTIAL ARTSThe Dirty StyleBy Ted TaburaPolynesian Martial Arts as never seen before! "The Dirty Style" presented by Hanshi Tabura includes a unique set of self defense  techniques of Hawaii’s original Martial Arts.
This is the last video of Hanshi Tabura that was taped in the MastersMag Studio before his passing.
Also included in this program is Hanshi's footage of the last tournament held at the Universal Hotel in Hollywood.

Ted Tabura
Born and raised in Hawaii, Shihan Tabura began his martial arts training under his cousin's tutelage in a backyard dojo. Later, after moving to Southern California, Ted discovered the Okinawa-te dojo headed by another Hawaii-born instructor, Shihan Gordon Doversola. While training at the Okinawa-te dojo, Tabura met John Louis, who became his final instructor in Okinawa-te. Martial art has been a way of life for Master Tabura. There were many years of tournament competition in which Shihan Tabura won many trophies around the world. Tabura Sensei was dubbed “The Sickle Man” by Sijo Adriano Emperado, founder of Kajukenbo, for his mastery in the use of the Japanese kama (sickles). Shihan Tabura directs the annual Festival of the Kings Karate Championship in Maui, Hawaii, one of the greatest tournaments in the U.S.