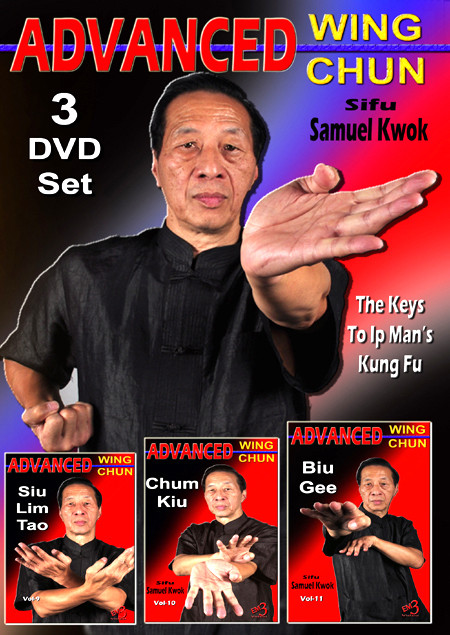 Advanced Wing Chun (New Release)
ALL 3 DVD Set  - Vol-9-10-11
AS TAUGHT BY THE GREAT GRANDMASTER IP MANby Sifu Samuel KwokGrandmaster Samuel Kwok has been studying Wing Chun since 1967. After moving to the UK in 1972, he studied under Lee Sing. After returning to Hong Kong, Kwok began intensive private study with Grandmaster Ip Chun. He was awarded Master Status in 1981 and represented Ip Chun for many years. Grandmaster Kwok was the first to bring Ip Chun and Ip Ching from Hong Kong, and introduce their teaching to the U.K. Europe, Germany, Australia, Denmark, and the U.S. In 1994, Grandmaster Kwok returned to study with Grandmaster Ip Ching. He is the senior representative of the Ip Man / Ip Chun / Ip Ching lineage in the U.K. and U.S., with certified instructors around the world.

Sifu Singh is a descendant of an unbroken lineage of masters, He has spent years studying with masters and eating the bitter pill, training and teaching so he can pass on the ancient arts to a modern, cutting edge audience. His science of movement, fighting, wellness, and strategy is an evolution of a global journey spanning continents and cultures. It culminates in the present system which he teaches to Navy SEALS,U.S.
Secret Service, SWAT Commanders and Police Captains, executives, FBI, CIA, CEO's, DEA, professional athletes, elite law enforcement personnel throughout the United States, as well as other foreign and domestic military and intelligence agencies.