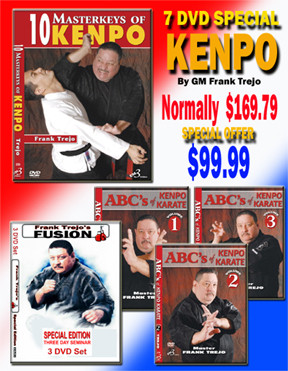 Frank Trejo is known the world over for his unique fighting abilities and for being one of the top students of the great Ed Parker. He was the head instructor at the legendary Ed Parker’s Kenpo Karate Studio in Pasadena, where thousands of practitioners from around the world went to learn the art of Kenpo from the original source. He has crossed all boundaries by combining Boxing, Kickboxing, Kenpo, Judo, and Ground Fighting in a concept he likes to call "Kenpo Fusion." He has become a legend in the world of martial arts in America. He is the kind of individual who will go to any lengths to continue his study of Kenpo and to preserve the ethics intrinsic to the practice of martial arts.