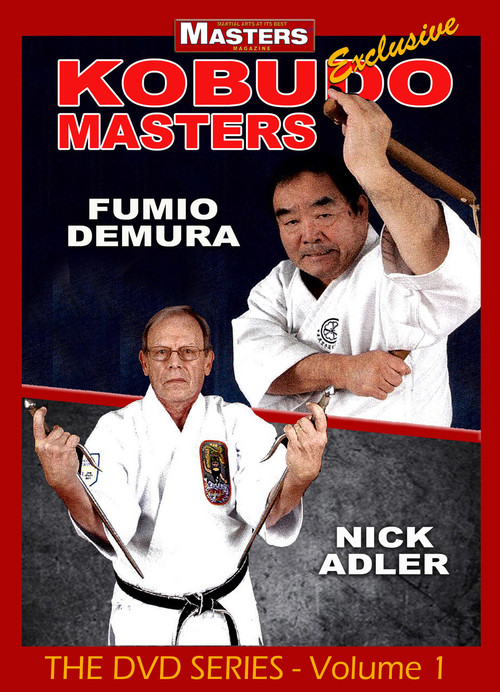 FUMIO DEMURA was born on September 15, 1938, in Yokohama, Japan. At the age of 9, he began training in karate and kendo under an instructor named Asano. At the age of 12 he started training under Ryusho Sakagami in Itosu-kai karate. Demura received his 1st dan black belt in 1956, and won the East Japan Championships in 1957. In 1959, he began training in kobudo, a style of Okinawan weapons training, under the direction of Taira Shinken. In 1963, he "came to know the Koga Ryu Ninjutsu Soke, Seiko Fujita- a 14th Generation Koga Ryu Ninja - personally" (quote attributed to Fumio Demura himself). Demura met martial arts scholar Donn Draeger, who introduced him to Dan Ivan, who would eventually bring him to the United States of America as a karate instructor.

NICK ADLER Hanshi, 10th Dan, Isshin-ryu Karate, Kyoshi Okinawan Kobudo, and Renshi 5th Dan Okinawa Kenpo Kobudo. Hanshi Adler is a direct student of Don Nagel, 10th Dan, USA, and Angi Uezu, 10th Dan, Okinawa. He is President of the Nick Adler's Centurions, and Member of the Executive Board of the International Karate Kobudo Federation. He is considered a Pioneer of Isshin-ryu Karate in the States and is a well known tournament promoter and sponsor of the "Samurai Spirit" Traditional Japanese/ Okinawan Tournament held each spring. Hanshi Adler is also a member of the IKKF Renshi-Kai (for Kobudo) and a IKKF San Ju Nen Kai member.