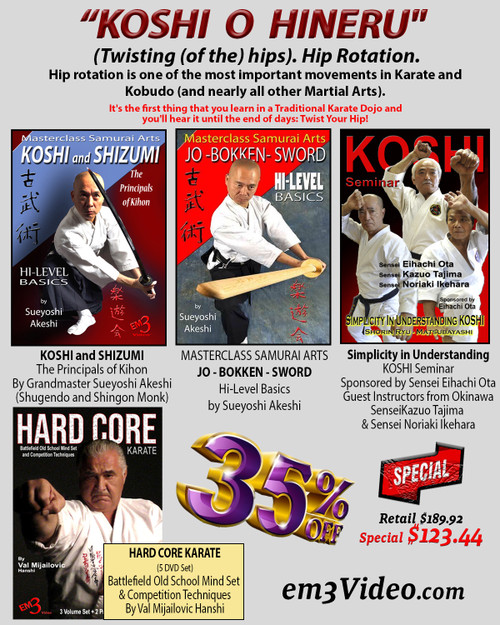 Hip rotation is one of the most important movements in Karate and Kobudo (and nearly all other Martial Arts). It's the first thing that you learn in a Traditional Karate Dojo and you'll hear it until the end of days: "Twist Your Hip!"

KOSHI and SHIZUMI
The Principals of Kihon
By Grandmaster Sueyoshi Akeshi
(Shugendo and Shingon Monk)
Koshi is the center of all martial art techniques. Koshi means the hips and hip motion is the center of all motion. The hips contain the center of gravity of the human body. The body follows it's center. When the hips move, the body follows. When you learn to control your center you control your whole body. When you control your opponent's center, you control the opponent.
Grandmaster Sueyoshi Akeshi is a Shugendo and Shingon Monk, scholar of the martial traditions and expert in Iaido. He has carried out for years an intensive work of dissemination and teaching of the Japanese martial arts. His unique methods of training brings evolutionary understanding of the "Body in Motion" that can be applied in any martial art style.
Item em3-701-2 ISBN: 8526684218156