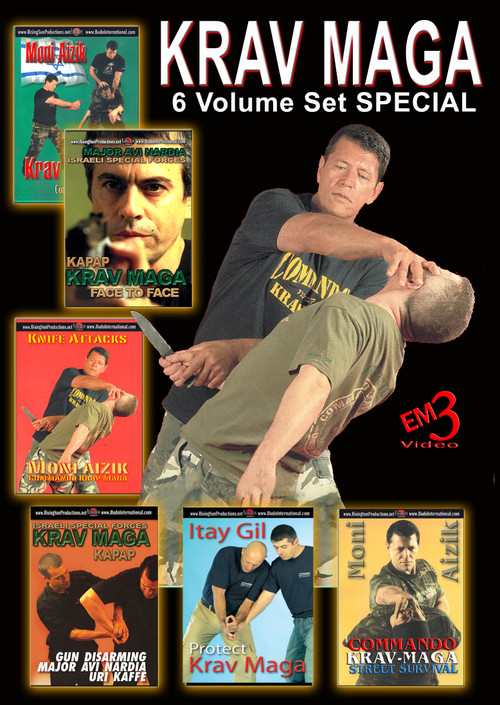 COMBAT SURVIVAL MILITARY
Moni Aizik, co-creator of Modern Krav Maga for the Israeli army, is the founder of
Combat Survival, one of the most devastating combat systems that includes some of
the best techniques from Lotar, Kapap and Krav Maga, among others. From his hand
we will study how to combat the most compromising situations of grips and strangula-
tion's, knife treats and attacks from multiple positions. ground fighting and treats with
pistol and disarms, as well as the most common errors that we can commit.

FACE TO FACE By Major Avi Nardia
Krav Maga is an Israeli Martial Arts and self-defense system which contains exercises
and principles, that allows students to reach their most effective level quickly and
easily. Instructor Major Avi Nardia brings more than 24 years of experience as a
training officer in the Israeli army, police, and anti-terrorist services to demonstrate
Krav Maga on this instructional DVD for beginners. He discusses in detail, three basic
movements which employ techniques and styles that are designed for tackling difficult
situations such as grabbing, choke holds, knife
attacks and more.

Moni Izac Knife Attacks
When faced with a knife attack, if for some reason you can not escape, then you must
be able to fight back. Moni Aizik is the founder of Commando Krav Maga, a system
based on the reality of commando combat in the field of war which is presently being
taught in over twenty countries throughout the world. In this DVD, Moni Aizik teaches
how to defend and fight against a knife attack. He will teach about using makeshift
weapons and empty hand techniques. He will explain the more serious errors which
people commit while trying to disarm an attacker. He goes through the most common
lethal attacks, threatening situations and what to do when we receive a cut.
Finally, there are training exercises, which he uses to improve strategies in these
situations.

GUN DISARMING
The Sergeant Uri Kava Police Unit of the Israeli border, and student of Lieutenant
Colonel Chaim Peer (founder of Kapap), Avi Nardia (Yamam Special Forces) is
currently an instructor ofKrav Maga and Kapap Lotar. This video shows techniques
disarmament of firearms that are integrated in paragraph CQB (Close Quarter Battle)
Kapap system. Techniques disarmament, projection and control in situations more
common following the 7 basis points of disarmament: the luck factor, the line of fire,
the weapon technology, assessment of the situation, the timing,
the environment, and post-conflict , all of which will determine the success of our
reaction.

PROTECT
Itay Gil is one of Israel's most skilled and knowledgeable teachers of Krav Maga.
This DVD will take your self defense training to an all new, high level, where only a
Master instructor like Gil can take you to.

Former member of Yamam elite unit where he later became Chief Instructor in hand-
to-hand combat, Itay Gil continues to provide his services to the Israel Defense Forces
(IDF) as an instructor for ani-terrorist units. He is also president of Protect,
The leading training and private securitKRAV MAGAy service company in Israel, which officially
cooperates with IDF and government agencies.

COMMANDO STREET SURVIVAL By Moni Aizik
In the street - the simpler the better! In the majority of cases, we will only have a few seconds to react,
so we have to be efficient and our techniques simple and flexible. That is the beauty of Krav
Maga commando. One only needs to know one technique that can be utilized universally and that
will allow us to react and adapt ourselves to every kind of attack. Moni Aizik, an ex-elite commando in
the Israeli Special Forces and founder of Krav Maga commando, shows us in detail the way to survive.