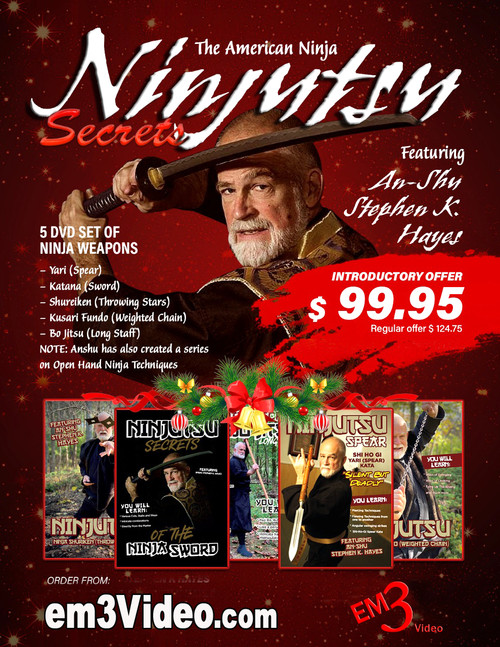 Vol-2 Ninjutsu Secrets of The Ninja Sword is all about the Ninja Sword and how it is used. Remember, Ninja were all about
stealth and not being seen. An-Shu Stephen K. Hayes has most of his life studying the way of the Ninja and it is most
certainly shown in this DVD. You will learn cuts stabs slices and combinations like no other DVD.

Vol-3 Ninjutsu Ninja Shuriken (Throwing Stars) An-Shu Stephen K. Hayes teaches the art of the Shuriiken and Dirk (throwing
Knife) used to fell an opponent. You will learn various ways of using these weapons that are particular to the Ninja way of
life. Learn to perfect your accuracy. Ways of hiding these weapons and lots more.

Vol-4 Ninjutsu Kusari Fundo (Weighted Chain) is a weighted chain with weights on each end. The Ninja of 1500 used this
weapon for tying people up and for striking them close and from afar. This information has never been shared before on
DVD and we are sure you will be throughly amazed at what An-Shu Stephen Hayes teaches you in this one video.

Vol-5 Ninjutsu Secrets of The Bo Jitsu (Long Staff) has been around from the 1500’s but rarely is it taught the way An-Shu
Stephen K Hayes teaches it in this unique one of a kind DVD. He will teach you so many skills that a bo offers. You will
learn a rare and valuable katas known Kuji Bo 1 & 2. The Japanese Bo staff is a weapon that traces its history back
centuries and now for one of the first times ever you will be able to learn the intricacies of the bo from a world reknown
Master Ninja.

Stephen K. Hayes has spent his entire adult life in the pursuit of perfection through the study of the Asian martial arts and spiritual traditions, living and traveling throughout North America, Japan, Europe, the Arctic, China, Tibet, Nepal, and India.

Promoting the benefits of Life Mastery Through Martial Arts, he travels the world as teacher, seminar leader, and lecturer, inspiring others by translating his extensive background in martial arts and meditation into practical lessons for handling the pressures and uncertainties of life. Students, readers, and seminar participants have reported that his teachings have brought them deep encouragement and empowerment, and inspired them to achieve new levels of success in their personal and professional lives.

An-shu Stephen K. Hayes is everyone’s image of the iconic master warrior sage. Black Belt Magazine calls him “A legend; one of the ten most influential martial arts masters alive in the world today” for good reason. He is peerless in his ability to share real and honest ninja combat secrets enriched by unparalleled insights from the Himalayan meditative mind sciences. His genius is his ability to translate exotic esoteric concepts from ancient cultures into practical useful understanding for Western seekers. His gift is his ability to deliver a complete and all-inclusive approach to personal security and personal power.