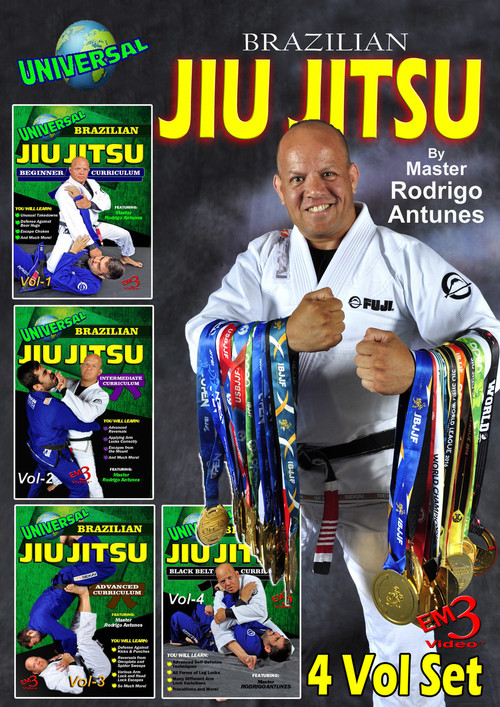 This Powerful DVD Set truly delivers a truly phenomenal Martial Arts punch! Beginning with the first volume, an introduction to the Blue Belt program, then moving into the Intermediate Purple Belt curriculum, through the Advanced Brown Belt lessons, and finally into the skill-refining Black Belt curriculum, this video series is the ultimate in complete and information-packed martial arts instruction. MASTER RODRIGO ANTUNES is one of the best Brazilian Jiu Jitsu practitioners to come out of Rio de Janeiro in a long time. Having trained in Mixed Martial Arts and a hard core Master of Brazilian Jiu Jitsu, Antunes teaches up close and personally, delivering a wealth of knowledge, and teaching the many secrets of his native Brazilian martial art in these four incredible DVDs. Students will be exposed to a vast array of skills and techniques, developed from years of immersive training and study, and effectively demonstrated by Master Antunes himself. This DVD set is so filled with valuable information and training, in fact, that viewers will find themselves growing exponentially in skill level with every repeated viewing!

Vol-1 BLUE BELT BASIC CURRICULUM:
Master Rodrigo Antunes is one of the best Brazilian Jiu Jitsu practitioners to come out of Rio de Janeiro in a long time. Former MMA fighter and hard core Master of Brazilian Jiu Jitsu now teaches his many secrets to his native Brazilian art on this DVD he will teach you up close and personally takedowns, defenses against wrist grabs, bear hugs plus how to perform sweeps, submissions, escapes, chokes and just so much more you will be amazed at his easy to follow techniques that have made him the hit of Hollywood California. BEGINNERS CURRICULUM YOU WILL LEARN: *Unusual takedowns. *Defense against bear hugs. *Escapes Chokes. *and so much more.

Vol-2 - INTERMEDIATE CURRICULUM:
YOU WILL LEARN: *Advanced Reversals. *Applying Arm Locks Correctly. *Escapes from the mount. *too many more techniques to mention..

Vol-4 BLACK BELT –BLACK BELT CURRICULUM:
YOU WILL LEARN: *Advanced Self Defense techniques. *All kinds of leg locks. *More different arm lock variations. *One lock right into another. *so much more your head will spin.

Rodrigo Antunes was born on the 29th of July, 1976 in Rio de Janeiro, Brazil.His introduction to martial arts was made at the age of 4, through judo, as there was a judo club very close to Rodrigo’s residence. He trained consistently and reached the grade of brown belt under the illustrious George Mehdi.

BJJ appeared in Rodrigo’s life when he was 8 years old. His cousin was a close friend of Carley Gracie and he would often encourage Rodrigo to give jiu jitsu a try. Rodrigo ended up signing to Reyson Gracie’s old academy in the Gàvea Shopping Centre. The training there was more focussed in the old school methods of self defence. A few years later, through some friends Rodrigo started training with another legend of the sport, Sergio Bolão. There he got in touch with the sporting aspect of jiu jitsu. Rodrigo also worked extensively with many other coaches from the Carlson Gracie lineage, such as Rodrigo Medeiros (founder of BJJ Revolution Team) and “Toco” Albuquerque (co-founder of Nova Geração). He also spent some time with Jorge Pereira.

His training continued under many different faces, including Ricardo “Franjinha” Miller and the man that would award Rodrigo his black belt in 1999, Ze Mario Sperry.

In 2012 Rodrigo Antunes received his 4th degree in BJJ from Grand Master João Alberto Barreto, a man who also had great influence in Rodrigo’s life as a martial artist.