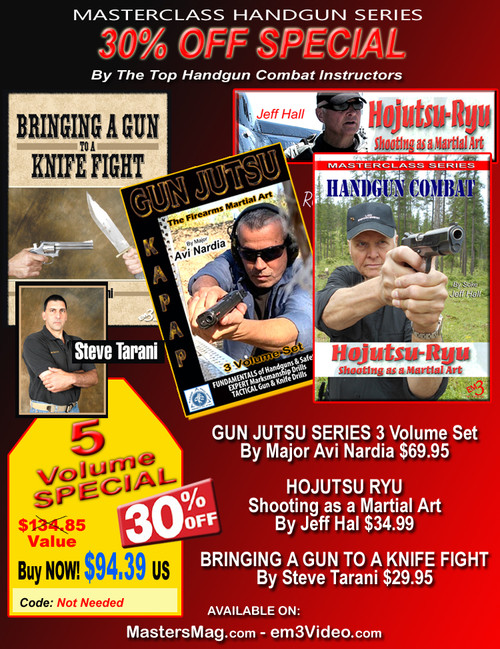 HOJUTSU RYU
Shooting as a Martial Art
by Jeff Hall

Jeff Hall is a retired lieutenant from the Alaska State Troopers, with over 25 years of combined military and law enforcement experience. While a Trooper, Jeff spent nineteen years on the pistol team and twelve on the S.W.A.T. team; he has used all of the techniques taught by Force Options in combat.

Hall is one of the only US police officers to win an air-to-ground firefight against an armed criminal. This occurred on 5/19/84 at Manley Hot Springs, Alaska; it was recently featured on the History Channel's Sniper: Deadliest Missions.

Jeff is a Handgun Combat Master and holds black belts in five arts, ranging from 3rd through 10th Dan. In 2012 he was promoted to Godan (5th Dan) in Shudokan. He is an NRA certified instructor in handgun, shotgun, submachine gun, carbine, and precision rifle; an NRA Adjunct Staff Instructor; and certified Police Master Instructor. All Force Options instructors are similarly qualified.

The video shows you how to instill calmness and confidence into your reaction to violent encounters, which is often overlooked in both martial arts and firearms instruction. Hitting the shooting range, Hall demonstrates just how his one-of-a-kind art form extends from the dojo to the street for real-life self-defense applications. Whether it's for the job or your own personal peace of mind, this Hojutsu-Ryu set provides what you need to deal with any assailant with force, precision and finality.

Bringing a Gun to a Knife FightBy Steve TaraniWho didn’t enjoy the movie scene where Indiana Jones blasted a sword-wielding opponent with his six-shooter? If he’s got a knife then just shoot him - right? Isn’t that all there is to it? It always works (and looks) great in the movies, but what about in real life? What about the real-world officers both patrol and correctional as well as other operating professionals who really have been there and tried that and it didn’twork?  Why is the “21-foot Rule” such a critical factor and what can you do to beat the odds stacked against you?What if it really happened to you – how would you react? Sure, you may carry a gun, but are you truly prepared to beat a surprise edged weapon attack and walk away in one piece? What qualification drills can you run to test your skills? Join leading subject matter expert Steve Tarani as he guides you step-by-step through this easy-to-follow tutorial on how to defeat a “knife fight” with a firearm. Scope of study includes: Anatomy of a “Knife Fight”, 28 real-world reasons why your gun may not be the first choice, utilizing the Two-second Rule, finding optimal Range and Position, defeating the Action-Reaction Power Curve, how to reduce Liability (personal injury) and Reactionary Gaps, utilizing the Second-hand Rule, shooting from Retention Position, transitions, critical on and off-range training drills, and most importantly - how to not fight but win with a gun.