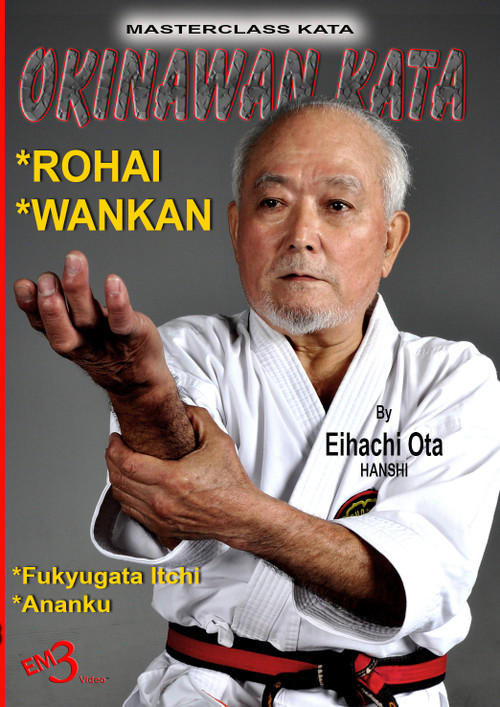 Rōhai (鷺牌) meaning “vision of a white heron” or “vision of a white crane” is a family of kata practiced in some styles of karate. The kata originated from the Tomari-te school of Okinawan martial arts. It was called Matsumora Rōhai, after Kosaku Matsumora, who was presumably its inventor (not to be confused with Sokon Matsumura). Ankō Itosu later took this kata and developed three kata from it: Rōhai shodan, Rōhai nidan, and Rōhai sandan. In Shorin-ryū and Matsubayashi-ryū this kata introduces Gedan Shotei Ate (Lower/Downward Palm Heel Smash) and Ippon Ashi Dachi. (One Leg Stance) It contains a sequence of Tomoe Zuki (Circular Punch) exactly the same as the one in Bassai, although the ending of the sequence chains into Hangetsu Geri/Uke (Half Moon Kick/Block).

Wankan (pronounced Ohkan) (王冠) (Japanese: "King's Crown" or "Emperor's Crown") is a kata practiced in many styles of Karate. Not much is known about the history of this kata. It originates from the Tomari-te school and in modern karate is practiced in Shorin-ryu, Shito-ryu, Shotokan, Genseiryu and Matsubayashi-ryu. It is often considered an advanced kata, despite its brevity. Karate master Shoshin Nagamine considered wankan to be his favorite kata. A quote from his book describes the kata as "Being characterized by unitary sequences of attack and defense".

Ananku (安南空) is a kata from Okinawan karate. Its history in Okinawan martial arts is relatively short in comparison to other kata as it was composed by Chotoku Kyan. Its meaning is "Light from the South" or "Peace from the South", as it is thought to originate when Kyan returned from a trip to Taiwan.

What makes this kata special is its techniques of offense and defense while in zenkutsu dachi and Naname Zenkutsu Dachi (otherwise known as front leg bent stance or bow stance and Slanted Front Stance, Ryo-hanchin dachi in Okinawan) This kata also introduces the aforementioned Naname Zenkutsu Dachi in Shōrin-ryū and Matsubayashi-ryū. It is also the first Shōrin/Matsubayashi-ryū kata to start with a centered movement blocking to both sides of the body.