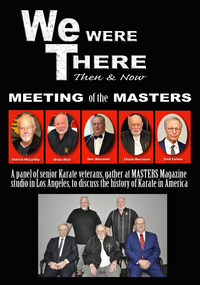 We Were There (Then & Now) - MEETING of the MASTERS

We Were There
(Then & Now)
MEETING OF THE MASTERS

A panel of senior Karate veterans, gather at MASTERS Magazine studio in Los Angeles, to discuss the history of Karate in America

Conversations with five veteran Karate instructors, discussing the introduction, transformation, and differences between the art, as it was introduced, taught and practiced by the general public in North America, from its public appearance until now.

Don Warrener - Accomplished author, producer, distributor and the founder of Warrener Entertainment Inc. One of the leading Martial Arts Historian in the World. Over fifty years of training and teaching karate.