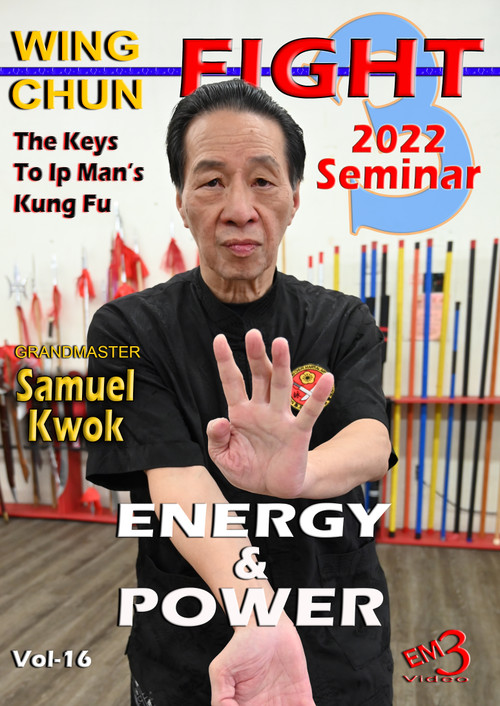 Learn the simple and effective ways of defending and countering most common attacks.

Grandmaster Samuel Kwok has been studying Wing Chun since 1967. After moving to the UK in 1972, he studied under Lee Sing.  After returning to Hong Kong, Kwok began intensive private study with Grandmaster Ip Chun. He was awarded Master Status in 1981 and represented Ip Chun for many years. Grandmaster Kwok was the first to bring Ip Chun and Ip Ching from Hong Kong, and introduce their teaching to the U.K. Europe, Germany, Australia, Denmark, and the U.S. In 1994, Grandmaster Kwok returned to
study with Grandmaster Ip Ching. He is the senior representative of the Ip Man / Ip Chun / Ip Ching lineage in the U.K. and U.S., with certified instructors around the world.

CUSTOMER REVIEW:
Wing Chun Fight Seminar Vol-16 (2022) by Samuel Kwok.
Grandmaster Kwok demonstrates forms well. He also demonstrates how to throw a proper punch and and how to get maximum power when striking. He goes over various punching techniques and at different angles. He shows you how to use  proper body mechanics so that you do not injure yourself. In just a short period of time he shows students how to punch properly when hitting a pad. I found it very beneficial. I hope he comes out with more material.

STREET SELF DEFENSE-2 - The Practical Application 00:56

STREET SELF DEFENSE-2 Practical Application As Taught by Grandmaster Ip Man (Wing Chun) By Grandmaster Samuel Kwok In "Practical Application of Street Self Defense 2" Sifu Kwok demonstrates a simplified version designed for all ages. Learn how to avoid bad situations on the street by using simple and effective strategies. One step techniques proven to defeat your opponent and allow you to escape. Wing Chun originally invented by a small women teaches us how to misdirect our opponents power and turn it against them. Grandmaster Kwok simplifies those techniques for the average person. Included: Situational Awareness - Mind Set & Danger Zones Defending Against Single Hand Grabs PERCEPTION - How you perceive threat Defending Against Double Hand Grabs Reaction Momentum Hand Grab Escapes Simultaneous Block & Attacks Dealing with Hook Punches & Upper Cuts The Four Gates of Wing Chun Responding to Straight Punches Responding to Side Attacks Responding to Back Holds Responding to Chocks Tips Having a plan in mind (Plan of Action) BUY DVD & Video Downloads at: www.em3Video.com Item:em3-359 ISBN:0694536339866 TRT:49 minutes