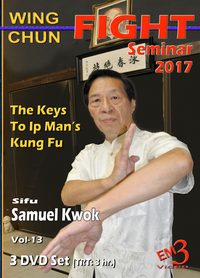 Fighting on the outside of the opponent rather than facing them head on. This position is at 30 degrees outside of the opponents
lead shoulder, Wing Chun practitioner can strike with both their arms, while their opponent can only strike with one of their own
arms due to poor positioning. This is often referred to as “taking the blindside” or “fighting on the outside gate”.
(8 hr. Seminar edited into 3 hr. volume DVD Set.)

Customer Review:
Grandmaster Kwok shows you how to use kicks and how to defend against kicks and punches. Demonstration of overcoming a physically stronger opponent was impressive. Sifu Kwok makes it easy to understand. I can see why he is so highly respected in the martial art world.