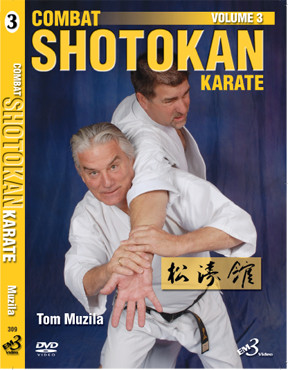 Vol-1, 2 & 3 - This series of Shotokan DVDs is devoted to the various traditional combat and fighting aspects of Shotokan Karate.  Multiply martial arts are very popular now.  In a good style, such as Shotokan, all aspects of the engagement of a fight are addressed, including far distance, close-quarter, takedowns off of attacks, and various controlling techniques.  Also demonstrated is Irimi, which is very rarely seen executed properly in karate.  Irimi in Japanese means entering techniques, or better yet, entering mentality, where you beat your opponent to an attack at the moment he decides to attack.  This series of Combat Shotokan DVDs covers all of those fighting concepts and principles. Basic sparring concepts and techniques are first addressed, such as how to take advantage of the first engagement of the fight.  Follow-up techniques and combinations on how to overwhelm your opponent also are addressed, along with close-quarter combat techniques that can network over as basic self-defense principles.  Traditionally, this is sometimes called torite in Japanese, or escaping techniques.  Then toward the end, various techniques are taught and demonstrated on how to throw an opponent off by executing a strike and using the momentum of that strike to help throw him.  In Japanese, this is sometimes referred to as nagawaza. If an individual practices these concepts and principles diligently, he or she will be trained to handle, control, and understand the full engagement of any fight.