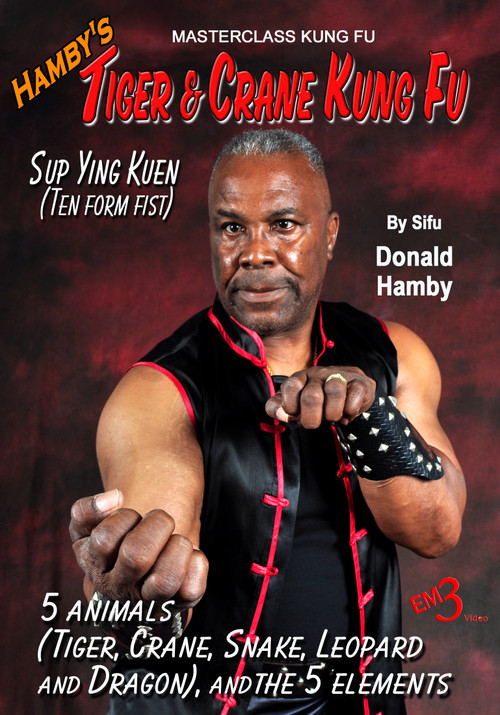 Sifu Donald Hamby has over 45 years of experience in the martial arts. He is known as one of Master
Bucksam Kong’s most prominent students. He has also received private instruction under the present
Hung Gar Grandmaster Lam Chun Fai, son of Great Grandmaster Lam Jo.
He has appeared on major television shows such as “Ripley’s Believe It Or Not” and “More Than Human” on the Discovery Channel. Sifu Hamby was the first to have the 4 major books of Master Lam Sai Wing translated into English so that his legacy will be passed on to future generations. He has written numerous articles on Hung Gar that have appeared in some of the most prominent Kung Fu magazines.

Volume 5
Sup Ying Form & Applications (The Ten Form Fist)
This is the famous set created by Wong Fei Hung. Also known as the Ten Form Fist, it utilizes powerful techniques characterized by the 5 animals (Tiger, Crane, Snake, Leopard and Dragon), and the 5 elements. Sifu Hamby does a fabulous job in performing the set and demonstrating its fighting applications. Every serious practitioner should have this.
TRT: 78 minutes