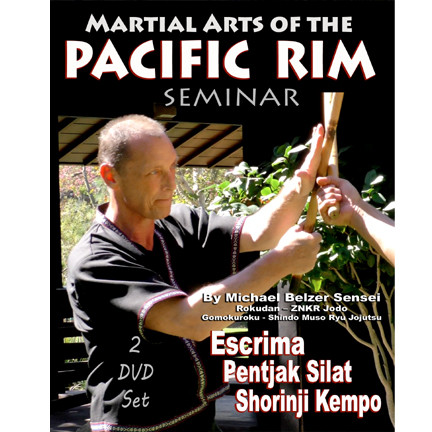 Martial Arts of the Pacific Rim

Michael began his training at the original Kali Academy located in Torrance, Calif under Guro Dan Inosanto and Richard Bustillio in 1979. in 1985 he traveled to the Philippines for a three month training tour with GM Antonio "Tatang" Ilustrisimo. Since 2005 Michael has focused on learning the art of Cabales-Serrada Escrima and earned his Advanced Instructor certification under Guro Khalid Khan.

1. Escrima, also known as Kali or Arnis, is the national fighting art of the Philippines emphasizing a "weapons first" approach, using the single stick, double sticks, stick & knife and a variety of bladed weapons along with empty hand applications.

2. Pentjak Silat is the fighting art of Indonesia which teaches an array of weapons and empty hand applications through the under-standing of Jurus (forms) with a variety of applications from each motion.

3. Shorinji Kempo is a Japanese version of Shaolin Gung Fu which utilizes a combina- tion of punches, kicks, open hand strikes, locks and throws to defeat an assailant.