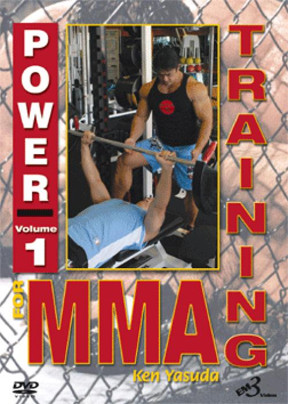 By Ken Yasuda
This is Vol-1 of 2 video series by Ken Yasuda (coach for the SABRES Team of the International Fighting League) is a blend of goal-oriented conditioning drills and training strength, agility, and quickness for effective fighting movement. It is power-packed with specific exercises focusing on multidimensional muscular strength and endurance to produce dynamic functional movement and power for professional MMA fighters.
Born in the ancient Japanese city of Kyoto, Ken Yasuda was blessed with a passion for the martial arts, studying Goju Ryu Karate and Shorinji Kempo from the time he was six years old. He became one of the youngest black belts under his master, and later worked with black belts in other styles before moving on to pursue his career as Japan's most famous professional bodybuilder. Known to many as “Japan’s Arnold Schwarzenegger,” Yasuda has trained such MMA stars as Scorpions coach Don Frye and Pride standout Kazuyuki Fujita, as well as Major League Baseball all-star Ichiro Suzuki. He brings a hard-nosed, highly philosophical approach to his Sabres Team of the International Fighting League, demanding total commitment from all his fighters.